ATLANTA – Today, Team Herschel released a statement regarding Roy Johnson Jr., the suspected killer in the Poughkeepsie Marriot Courtyard shooting on October 2, 2022. Johnson Jr. was arrested on felony gun and drug charges in July 2022 in Fulton County. After skipping his court hearing, the Fulton County sheriff’s office labeled him a wanted fugitive and issued a warrant for his arrest. Because of Raphael Warnock’s soft-on-crime policies, Johnson Jr. was able to flee and walk free for months.

Johnson Jr. appeared in Poughkeepsie, NY, just a few weeks later in August, being named as an individual under investigation in a gang-related murder in the area. Then on Sunday, he was identified as the alleged killer in the shooting of a hotel lobby in the New York hotel, which left an innocent father dead. 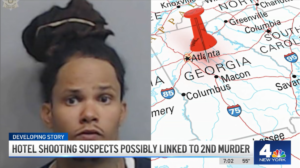 “Raphael Warnock continues to choose soft-on-crime policies over the safety of Georgians, putting their lives in danger,” said campaign spokesman Will Kiley. “At every turn, Raphael Warnock has done more to protect violent criminals than he has done to protect Georgia citizens. Warnock has voted against increasing funding for prosecutors to ensure violent criminals are properly detained pretrial and to empower law enforcement. A wanted fugitive was allowed to walk free in Fulton County after his arrest, and as a result, innocent lives were lost. Enough is enough.”