ICYMI: Over 90% Of Warnock’s Campaign Contributions Come From Everywhere But Georgia

ATLANTA – Today, Newsweek reported that more than 90% of all of Raphael Warnock’s campaign contributions have come from outside of the state of Georgia.

“Georgia pastor and Senator Raphael Warnock leads his Republican opponent and former NFL player Herschel Walker by more than $100 million in campaign financing, and more than 90 percent of Warnock’s funding is from outside the state.” 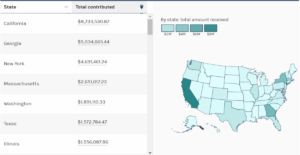 “Given that Raphael Warnock has voted with Biden over 96% of the time, it’s no surprise that 90% of his funding comes from everywhere but Georgia,” said campaign spokesman Will Kiley. “Over the past two years, Warnock has only answered to California liberals and Joe Biden. It’s time we send someone to the Senate who will answer to the people of Georiga. Herschel Walker will represent Georgians, not Joe Biden.”